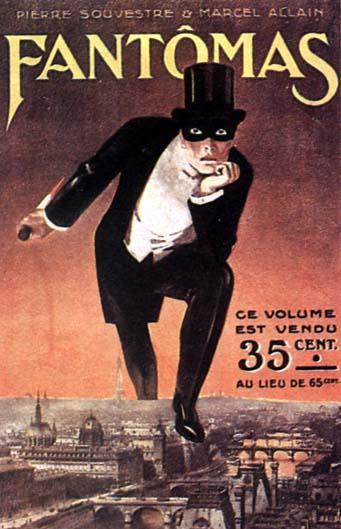 The character of Fantômas was created in 1911 by Marcel Allain and Pierre Souvestre for a series of turn-of-the-(20th)-century French novels.

In the original version, Fantômas — the name comes from the French words "fantôme", meaning "phantom" or "ghost" and "as", meaning "ace" — is an anarchist whose crimes are (supposedly) a result of his disdain for modern civilization; he is chased by a police detective named Juve and a journalist, Charles Rambert/Jérôme Fandor, but in spite of a few close calls, he is never caught. The novels were adapted for film many times; ironically, the most popular adaptation by André Hunebelle being In Name Only.

The first few novels were co-written by Pierre Souvestre (1874-1914), and Marcel Allain (1885-1969). The early death of Souvestre resulted in subsequent novels written by Allain alone. The literal translations of the original French titles are based on the list of Jean-Marc Lofficier.