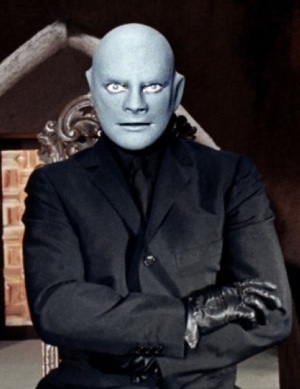 No, that's not the Blue Man Group.
"Humanity. What a wonderful puppet show! How could I get bored of it?"
— Fantômas
Advertisement:

Fantômas is a 1964 French film very loosely based on the novels of the same name. It turned the title character (a criminal and anarchist in the books) into a Blofeld-esque supervillain and spawned two sequels, Fantômas Unleashed in 1965 and Fantômas Against Scotland Yard in 1967.

The first film sees Fantômas (played by Jean Marais and voiced by Raymond Pellegrin) being very angry at Fandor (also played by Jean Marais), a Parisian journalist who has written a fictional (and ridiculous) interview of him. After bombing Fandor's editorial offices, he kidnaps Fandor, threatens to kill him, iron-brands him, and goes about ruining the journalist's reputation by committing a sensational theft wearing a Fandor mask. He also kidnaps Fandor's fiancée Hélène (Mylène Demongeot). Hot on the trail is buffoonish police commissioner Juve (Louis de Funès). Fantômas then starts committing robberies with a mask imitating Juve's face to get rid of him.

In the second film, Fantômas Unleashed (Fantômas se déchaîne), Fantômas kidnaps several scientists to conceive devices for his nefarious plans, and Juve and Fandor go after him in Italy.

In the third film, Fantômas Against Scotland Yard (Fantômas contre Scotland Yard), Fantômas ransoms several billionaires, threatening to kill them if they don't oblige to his "tax on the right to live". Juve and Fandor step up to protect one of these billionaires, the Scottish Lord Mac Rashley, and use him as bait to try catching Fantômas.

The Fantômas movies provides examples of: