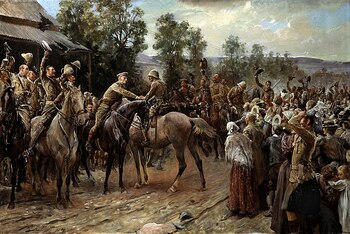 The Relief of Ladysmith, 1900 by John Henry Frederick Bacon
Advertisement:

The Second Boer War was the final phase in the British colonisation of South Africa.

The Boers were the descendants of Dutch settlers that founded the Cape Colony in the mid 17th Century. Over the course of the 17th and 18th centuries, their language and culture diverged from that of The Netherlands (by the early 19th century, the Boers' language was seen in the Netherlands as archaic and simplistic, almost baby talk; the Boers were strict Calvinist Protestants almost to a man, while in the Netherlands there were Catholics and less-strict Protestants, and by the middle of the 19th century secular liberals and socialists as well). In time, their tongue—different enough to be considered a separate language, similar enough to still be largely understood by a speaker of Standard Dutch—became known as Afrikaans, and the people Afrikaners. However, it took a while for these labels to catch on; even they weren't sure what to call themselves for the longest time, and until a certain, unclear point in the early 20th century, the English-speaking world called them Boers—Afrikaans and Dutch for "Farmers" (which most of them were).

The British took control of the Dutch Cape Colony in 1795 as a precautionary measure in The Napoleonic Wars: the French had occupied the Seven Provinces and Britain wanted to keep France from taking this all-important territory (guarding the main route to India). However, it wasn't until the 1820s that the British started moving in large numbers or made changes in the way things were run in the Colony; when these changes did happen, however, it annoyed the Boers to no end. Starting in the early 1830s, many Boers migrated to the interior of South Africa in an event known as the Great Trek, dealing with the Zulu people who controlled the land, and setting up a number of "Boer Republics

". While most of these were short-lived, two—the Orange Free State (roughly equivalent to today's Free State Province) and the South African Republicnote NOT the Republic of South Africa, which is today's SA (based in the present-day northeastern region of South Africa)—were long-lived, surviving for decades.

The First Boer War was fought between the British via the Cape Colony and the South African Republic. The Boers won the Battle of Majuba Hill, encouraging the British calling it quits. In the face of Boer resistance, it wasn't worth the time or money to subjugate them, and as long as they were in no position to overrun British South Africa the Crown had no problem with them being there.

The Second war was caused by increased tensions between the British and the Boer states of Transvaal and the Orange Free State, exacerbated by the discovery of the world's greatest gold deposits in said Boer States. (during the 20th century, South Africa produced >50% of the world's gold). British merchants like Cecil Rhodes - 'founder' of British Rhodesia - wanted in, and they agitated for the government to annex the Boer states, by force if necessary.

The resultant war was long, and bloody. It has been described by American historians as 'Britain's Vietnam, only not' - though a better way to put it might be that the American phase of the Vietnam War was like the Boer War, except they lost.

The war had three generally-recognized phases. The first consisted of a preemptive strike by the formal armies of the Boer republics, resulting in sieges of major Cape Colony garrisons at Ladysmith, Kimberley and Mafeking; the Empire tried to fight them off and relieve the sieges with the Cape Colony forces, which resulted in precisely nothing. In the second, the Empire abandoned all pretensions of limited warfare and poured everything it had into winning, bankrolled as they were by merchants eager to see the fields of Witterstrand under British administration so that they might invest in them and reap the benefits of the boom. The third phase was when the Boers, with their formal countries dispersed or otherwise in disarray, began to conduct a harrowing guerrilla campaign.note In retrospect, one might see it as Vietnam in reverse: where Vietnam began as a domestic South Vietnamese insurgency by the Viet Cong and then turned into direct fighting between the Americans and South Vietnamese against North Vietnam, the Boer War started as a direct conflict between the Boer republics and the British and then turned into a Boer insurgency. It is therefore, oddly, rather more like the Iraq War than Vietnam. Army eventually resorted to rounding up entire Boer communities and imprisoning them in so-called 'Concentration Camps', the first widespreadnote Spain had used camps in the Cuban struggle for independence and the United States was using similar camps at the same time fighting the insurgency in the recently-acquired Philippines, but the use was much more limited. use of the strategy.note Note that at the time "concentration camps" were exactly what they said they were: camps where the Boer population, previously dispersed thinly across the countryside, was concentrated in one place, to make it easier to deal with the insurgents, with the intent to release them as soon as the war was over. At the time the term sounded rather neutral; its current connotations of "place where you send people you don't like to die for no reason" is purely because the Nazis intentionally used the neutral term to mask the fact that they ran death camps and slave factories. That said, the British concentration camps were no picnic, either; food was often scarce—sometimes intentionally so—and thousands died from a combination of malnutrition and disease. Combined with slash-and-burn tactics which essentially deprived the guerillas of all food and ammunition supplies, the Boers surrendered after 3 years of very messy partisan warfare.

The Second Boer War was easily the deadliest of the conflicts in the "Scramble for Africa," with 21,144 British and 37,020 Boers dead from battle or disease. Most of the Boer casualties were civilians who died in internment, the result of poor administration which initially left many camps under-supplied. None died of starvation itself, but the malnutrition left many weakened and susceptible to diseases which spread easily in the confines of the camps.

The Dutch settlers never really got over this, and their own anti-British sentiment, especially as Britain began decolonizing it's other African conquests, eventually lead to the declaration of the Republic of South Africa in 1961 and...