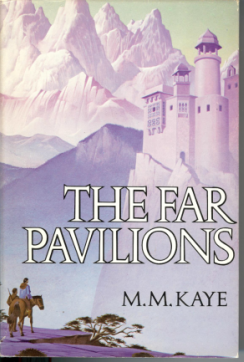 The book which started it all. 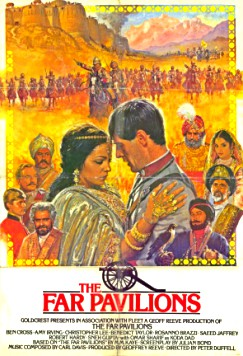 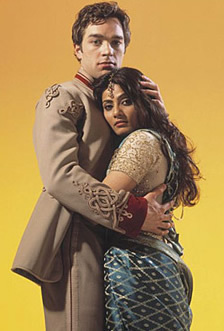 The stage-adaptation, featuring Ashton and Anjuli.
...India and its peoples; not the British India of cantonments and Clubs, or the artificial world of hill stations and horse shows, but that other India: that mixture of glamour and tawdriness, viciousness and nobility. A land full of gods and gold and famine. Ugly as a rotting corpse and beautiful beyond belief...
—The Far Pavilions
Advertisement:

The monumental masterwork of British author M. M. Kaye that took over a decade to write, The Far Pavilions was published in 1978 to worldwide fame, immediately becoming an instant, global best-seller, as well as M.M. Kaye's most famous and beloved work.

Spanning over two decades of the 19th century's most turbulent years in India, it is the lush, sweeping story of one man struggling to find who he truly is amid the triumph and tribulations of a life set against both a British-ruled India, and an ancient civilization that is slowly, but surely, turning towards the modern era. A book of love and war, prejudice and pride, courage and cruelty, honor and betrayal—and the unrelenting march of time that slows down for no one.

Born at the foot of the Himalyas, the orphaned British child Ashton Pelham-Martyn, is raised as an Indian by his ayah, Sita, who cares for him like her own son. When his true ethnicity is revealed to him, he is taken back to England to be molded into a proper Englishman. But it is in England where his identity first becomes a burden that is questioned time and time again by himself and others as he struggles to discover who Ashton truly is, and who he is not. Constantly at odds with both his peers and the world around him, Ashton realizes that it is both a blessing and a curse to see and understand multiple viewpoints, and to sympathize with more than one outlook in a world ruled and dictated by prejudice from all sides.

At once a historical, political masterpiece, and a stunning, romantic fairytale of a world and era long gone, The Far Pavilions remains a marvelous marriage between the East and West—a wedding of two different cultures, and the peoples of, and by them.

The book is divided into eight sub-books starting with Ashton's childhood, and progressing all the way to his inevitable involvement in the Second Afghan War (1878 - 1880)—the climax of the entire novel:

A truly monumental achievement, the British answer to America's Gone with the Wind or Russia's War and Peace—M.M Kaye's The Far Pavilions is the moving, passionate, and utterly epic tale of an era now lost to the memory of a history book, and the troubled man caught time and time again between its pages.

Upon release, the book was so popular that that it caused travel agents to devise tours of the locations featured in the story. Unfortunately since then, the book seems to have faded from more mainstream public memory. The Far Pavilions also inspired a massively popular mini-series adaptation in 1984 (one of HBO's first major original productions), and then in 2005, a stage musical. It was adapted again in the form of a Radio Drama in 2011.

Edit: As of 2017 and as part of the ongoing U.K.-India Year of Culture, The Far Pavilions is Set for a $150 million remake in a joint production between the U.K and India!

The Far Pavilions displays the use of the following Tropes:

...And it may even be that they found their Kingdom.