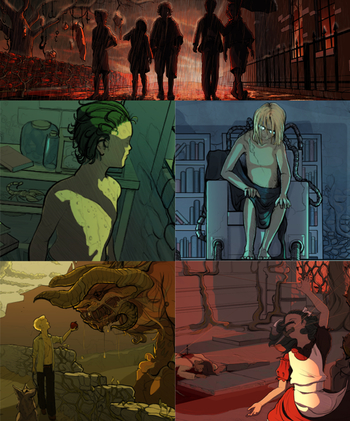 The year is 1921, and a little over a century has passed since a great mind unraveled the underpinnings of life itself.
Advertisement:

is the third Web Serial Novel from Wildbow, following on from his superhero novel Worm and the modern fantasy-horror story Pact. The story follows a group of children with extraordinary abilities from the Lambsbridge Orphanage—The Social Expert Sylvester (AKA Sy, the main protagonist and narrator), The Leader Gordon, borderline Humanoid Abomination Helen, The Team Normal Lillian, and Jamie, who has Photographic Memory—as they make their way in a world loosely inspired by Frankenstein, where the dead walk again, Immortality is within reach and bio-engineered monsters roam the streets. The basic story concept of a small group of supernatural orphans escaping from oppression and trying to have as much of a childhood/youth as they can on the side as they struggle on alone against a dystopian society thus has much in common with John C. Wright's Chronicles of Chaos series, although Wildbow takes the premise in a somewhat different direction.