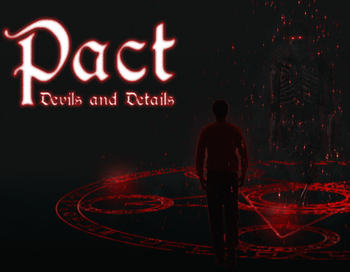 Damn me, damn them, damn it all.
Advertisement:

Pact is a modern supernatural horror story by Wildbow, centered on Blake Thorburn, a young man who returns after a long absence from his dysfunctional family when his wealthy, terminally-ill grandmother calls the family together to appoint an heir. After her death, Blake discovers that she has been keeping a secret that puts him and the rest of his family in grave danger. Started on December 17th, 2013, this Web Serial Novel is the author's second, following the popular superhero serial Worm. It can be found here.

The final chapter was released on March 3rd, 2015 with the Epilogue following on March 7th, and was followed by a third web serial, Twig.