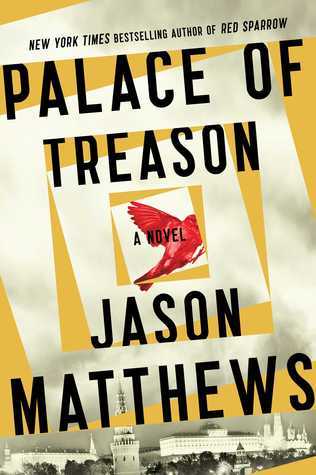 Palace of Treason is the 2015 sequel to Jason Matthews's 2013 novel Red Sparrow.

Captain Dominika Egorova of the Russian Intelligence Service (SVR) has returned from the West to Moscow. She despises the men she serves, the oligarchs, and crooks, and thugs of Putin's Russia. What no one knows is that Dominika is working for the CIA as Washington's most sensitive penetration of SVR and the Kremlin.

As she expertly dodges exposure, Dominika deals with a murderously psychotic boss; survives an Iranian assassination attempt; escapes a counterintelligence ambush; rescues an arrested agent and exfiltrates him out of Russia; and has a chilling midnight conversation in her nightgown with President Putin. Complicating these risks is the fact that Dominika is in love with her CIA handler, Nate Nash, and their lust is as dangerous as committing espionage in Moscow. And when a mole in the SVR finds Dominika's name on a restricted list of sources, it is a virtual death sentence...

A sequel, titled The Kremlin's Candidate, was released in 2018 as the conclusion of the Red Sparrow trilogy.