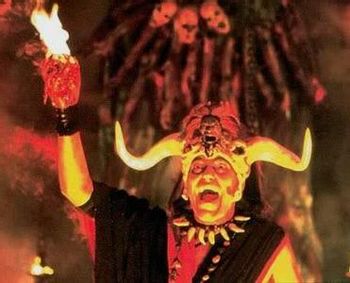 And it's on fire.
"At your command
before you here I stand
my heart is in my hand... (yeech!)"
— Tom Lehrer, "The Masochism Tango," An Evening Wasted with Tom Lehrer

Classic creepout device: This heart no longer occupies its usual place. But it still beats. Blood seeping from the severed arteries is optional. This may be supernatural (with the heart functioning as a Soul Jar) or natural (in which case it's usually just a momentary gross-out after the heart is ripped from a living victim's chest), but it's always creepy as hell.

Note that the "just ripped out" variety is Truth in Television: Cardiac tissue, unlike other types of muscle, generates its own muscular impulses, so a heart can continue to beat for a brief time after it is removed from the body.

See also And Show It to You, for times in which tearing the heart out wasn't enough for the killer.

Played for Laughs. The transplant heart, is visibly still beating and bouncing, even without a body.

Played for Laughs. The transplant heart, is visibly still beating and bouncing, even without a body.