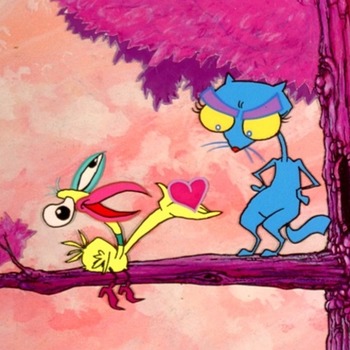 Purdy and Fergurina
The Dirdy Birdy (1994) is an animated short created by John R. Dilworth, creator of Courage the Cowardly Dog. It features a dimwitted bird name Purdy who falls in love with a cat named Fergurina. The short consists of Purdy trying to win Fergurina's affections (by showing his backside of all things) and getting rejected (and pummeled) in the process.

20 years after the creation of the original short, John Dilworth uploaded a redux

of the original short on YouTube with one minute of never-before-seen footage.