Literature / The Death of Koschei the Deathless 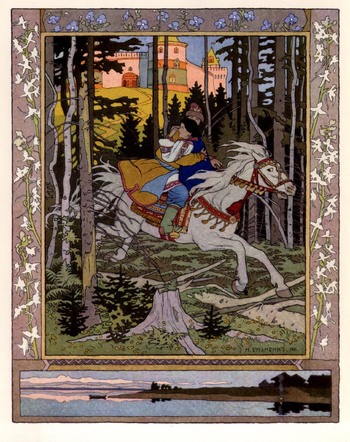 The Death of Koschei the Deathless or Marya Morevna (Russian: Марья Моревна) is a Russian Fairy Tale collected by Alexander Afanasyev in Narodnye russkie skazki (Народные Русские Сказки) and included by Andrew Lang in The Red Fairy Book and by William Ralston Shedden-Ralston Russian Fairy Tales: A Choice Collection of Muscovite Folk-lore.

Once upon a time there was a Prince named Ivan who had three sisters. And the time came when their parents passed away. And before dying, they made Ivan promise that he would let his sisters marry whoever they wanted.

Two years passed, during which time Ivan and his sisters were visited by three wizards, each asking for one princess' hand in marriage. True to his word, Ivan let his sisters marry their respective suitors and leave their home.

After a while though, Ivan was feeling lonely and decided to pay a visit to his sisters. As riding across the countryside, Ivan came upon the remnants of an army defeated by the forces of queen Marya Morevna. His curiosity piqued, Ivan introduced himself to Marya, who invited him to stay with her. Two days later, Marya and Ivan had fallen for each other, so they got married and Ivan went to live with Marya in her kingdom.

Then it happened that Marya had to go to war. Before departing, she left Ivan in charge of her coutry and warned him against looking into a certain closet. As soon as she was gone, Ivan investigated the closet and found Koschei the Deathless imprisoned in the room. The old sorcerer begged for fresh water, so Ivan decided to have mercy on him and satisfy his request. After drinking three buckets of water Koschei recovered his strength, broke his chains and abducted Marya.

Feeling guilty, Ivan set out to rescue his wife. Ivan found the place where Marya was being held and he attempted to rescue her three times, getting killed off by Koschei on the third attempt. However, his brothers-in-law felt something awful had happened to him, so they searched for his remains and used their magic to relive him.

Ivan remained determined to save Marya, but he realized he could not outrace or fight Koschei on horseback because the sorcerer's horse was too fast and powerful. Ivan asked Marya to find out where Koschei got his horse from, and she subtly pumped the sorcerer for information. So, Marya learned that Koschei got his horse from a Baba Yaga who lived beyond thirteen lands and a river of fire and relayed his words to Ivan.

Ivan set off on an arduous journey and found Baba Yaga. The witch said she would give him one of her steeds if he took care of her mares for three days, but she would cut his head off if he lost merely one of them. Ivan agreed, but every time he drove the horses afield, they tried to run away from him, only to be forcefully herded back into the stable by several animals whom Ivan helped during his journey. On the third day, one of his animal helpers advised him to hide in the stable and make off with one specific horse. Since he realized that the witch was looking for one excuse to behead him, Ivan stole that horse and rode away from the house at the dead of night. Baba Yaga set off in pursuit but met her death as attempting to cross the fire river.

Prince Ivan fattened up his horse until they were ready, and then he headed towards where Marya was held prisoner. Once again, Ivan and Marya fled, and Koschei rode after them. The old sorcerer eventually caught up with them and nearly cut Ivan into pieces again, but Ivan's horse knocked him down and Ivan bludgeoned Koschei to death. Then Ivan and Marya rode away to visit Ivan's sisters and brothers-in-law, who congratulated him for getting his beautiful wife back.

Full text in the Project Gutenberg

Compare with "Tsarevich Petr and the Wizard" another Russian tale featuring Koschei- and "The Nine Peahens And The Golden Apples".