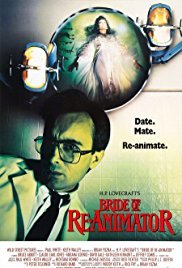 The 1989 sequel to Re-Animator directed by Brian Yuzna, which also has Jeffrey Combs, Bruce Abbott and David Gale reprising their roles.

Eight months have passed since the events of the first film, and Herbert West and Dan Cain, now both doctors, continue experimenting with the Re-Agent formula to perfect bringing the dead back to life. Dan, growing uncomfortable with Herbert's experiments, decides that he will move out of the house that he and Herbert share. To convince him to stay, Herbert takes the heart of Dan's deceased girlfriend Meg and offers to create a body for it. Subplots include the return of Dr. Hill and a detective investigating the massacre at the end of the first movie.

Bride has examples of: