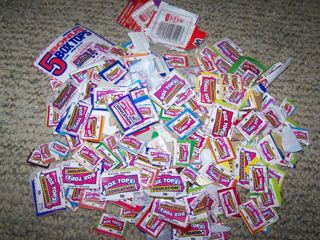 Behold the power of boxtops!
"Our lieutenant is the up-and-coming type.
Played with soldiers as a boy you just can bet.
It is written in the stars
He will get his captain's bars,
But he hasn't got enough box tops yet."
—Tom Lehrer, "It Makes a Fellow Proud to Be a Soldier", An Evening Wasted with Tom Lehrer
Advertisement:

There are promotions in Real Life by companies that work like this: On each package of the product there's a coupon, you collect X coupons, send them in, and win a prize. X may be a reasonable number, but can also be ridiculously high. Often used to gauge and improve customer loyalty. A common marketing trick.

Sometimes, this works like a lottery: Your chance of winning increases if you send in more coupons.

In fiction, the first prize is something the protagonist really wants; like an all-inclusive holiday in Hawaii for the whole family. Hilarity Ensues when:

Compare and contrast Free Prize at the Bottom. The most literal type of Plot Coupon. One of the types of prizes could be sea-monkeys.

Example of:
Free Prize at the Bottom