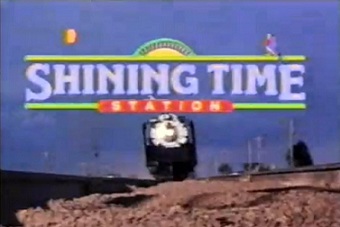 Shining Time Station was a children's television series created and executive produced by Britt Allcroft and Rick Siggelkow and presented by WNET New York. It ran on PBS for three seasons, from January 29, 1989 to June 11, 1993, with four hour-long "Family Specials" premiering in primetime throughout 1995. Reruns continued to air on PBS until June 11, 1998.

It primarily concerned station manager Stacy Jones (Didi Conn), scheming arcade manager Schemer, and Stacy's nephews, Matt and Dan, both of whom became friends with Tanya and Kara, the granddaughters of Harry Cupper, the titular station's engineer and mechanic. Completing the main cast were engineer Billy Twofeathers (who replaced Harry after Series 1) and Dan and Kara's close friend Becky.

The children would often be told stories of Thomas & Friends by the magical Mr. Conductor, a strange six-inch tall man who secretly lived at the station. These stories would occasionally have elements that paralleled events at the station. One of the series' main purposes was to introduce the Thomas brand to America, which it succeeded at doing.

In addition, various characters would request songs from the jukebox, and these songs (typically re-arranged versions of classic folk songs like "Jesse James" and "Cannonball Blues") were played by a band of puppets who lived in the jukebox, courtesy of Flexitoons.

The show, though geared at children, also appealed to adults, and generated a few "family specials". It also, less felicitously, spawned the movie Thomas and the Magic Railroad and the Spiritual Successor The Noddy Shop.