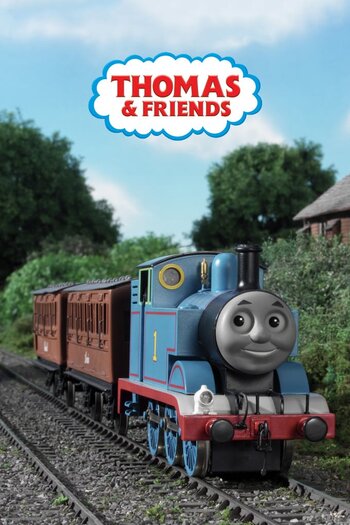 Making tracks to great destinations.
"It's Thomas The Tank Engine,
Hip, hip, hip, hip, hooray,
Chugga-Chugga, Chug Chug,
Chuff, Chuff, Chuff,
He rides along the way,
And when you hear that whistle,
It can only be one train,
Our favorite little engine,
Thomas is his name."
—Thomas's Anthem

Thomas & Friends, formerly known as Thomas the Tank Engine & Friends, is a British series first broadcast in 1984. It began life as The Railway Series, a series of books about a group of talking steam engines living on the Island of Sodor and the adventures they have under the guardianship of the Fat Controller (Sir Topham Hatt). The books were originally written by the Reverend Wilbert Awdry; his son Christopher later took on the job. There is also a widely-available series of books based on TV episodes.

The episodes—and until Hero of the Rails, the characters as well—are told through a narrator, with many of the stories being renarrated for North American audiences.

After 24 series (12 each of the live action models and having Shifted to CGI), the 24th series was the last for the show as it was cancelled due to low toy sales. A new Continuity Reboot, Thomas & Friends: All Engines Go, launched on Cartoonito and Netflix in September 2021. A collaboration between Mattel and Nelvana, the show is generally Denser and Wackier than the original series in order to appeal to a younger demographic, with the engines interacting with the laws of physics directly. However, after massive fan backlash in reception to the series, Mattel instead relegated to its own independent series entirely.

You're a really useful trope!