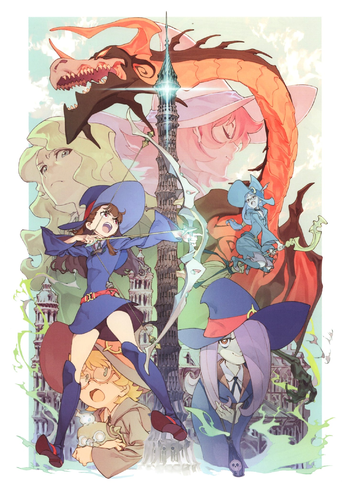 Little Witch Academia is a 2013 half-hour animated short film produced by Studio TRIGGER as part of Japan's "Young Animator Training Project," a government-sponsored program which hopes to train new animators under the guidance of industry masters; in this case, Yoh Yoshinari of Studio Gainax fame. The film is the first installment in the Little Witch Academia franchise.

The short film follows Atsuko "Akko" Kagari, a witch-in-training at Luna Nova, a European Wizarding School. Akko dreams of following in the footsteps of Shiny Chariot, whose flashy stage magic captivated Akko during her youth. But Akko has two major problems standing between her and her dream: Akko doesn't come from a wizard family (she can't even fly a broom properly) and most of the wizarding community thinks of Shiny Chariot as little more than a charlatan, both of which makes her incredibly unpopular and the subject of mockery amongst her teachers and her peers, particuarly by local queen bee, Diana Cavenidish.

One day, when Akko and her friends, the shy and quiet Lotte Jannson and the mischivous potion loving Sucy Manbavaran, are assigned to go on a labyrinthine treasure hunt deep beneath the school, Diana, in a act of pride and recklessness, accidentally unleashes a threat that threatens to take away Luna Nova's magic and destroy the school. Can Akko's faith in Shiny Chariot ultimately save her friends and their magic? Maybe with the help of a special staff that once belonged to her idol, she can.

The film would premiere in theatres across Japan under the project on March 2nd, 2013, to weak reception, as the film failed to gain traction in Japan, with one event being cancelled due to not enough tickets being sold

Shortly afterwards, Trigger would later upload the film onto YouTube with English subs, which would see the film recieve a large surge in popularity in the west (receving over 850,000 views until it was taken down), as many grew attached to its animation and Harry Potter-esque setting and cast. The short film, alongside the later Kill la Kill, would ultimately go on to establish Trigger as a big name in the modern anime world, on top of establishing Yoh Yoshinari as one of the studio's big name directors.

The film would later receive a sequel in 2015, titled Little Witch Academia: The Enchanted Parade.

Not to be confused with the 2017 anime of the same name.