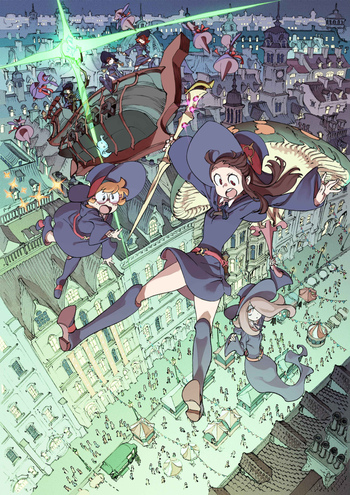 Little Witch Academia: The Enchanted Parade is a Japanese animated film and the second installment of the Little Witch Academia franchise. It premiered for Kickstarter pledgers July 3, 2015note Studio TRIGGER asked those given the preview not to spread it on the internet. One can guess how that went. and was released for the general public on October 9 of the same year.

Akko, Sucy, and Lotte are tasked with planning the annual Witch Parade, a parade that commemorates the Witch Hunts of the middle ages after they have once again caused trouble. They are not the only troublemakers tasked with the "prestigious" task as they are joined by Amanda O'Neill, a wannabe thief; Constanze Braunschbank Albrechtsberger, a Magitek Gadgeteer Genius; and Jasminka Antonenko, a Big Eater. However, Akko, not approving of the shameful and humiliating nature of the Witch Parade, decides to completely transform it into a fun and wondrous parade that celebrates magic in the vein of her idol's shows titled The Happy Time Project. However, her overambitious ideas and insensitive tendencies end up causing tension and conflict between the main trio, which culminates with a falling out between them after Akko accidentally tore up Lotte's music sheet. Can she manage to get the parade working with Amanda, Jasminka and Constanze, will the trio resolve their conflict and be friends again and more importantly, can they stop an unsealed giant from ruining everything?

The film was notably crowdfunded by an incredibly successful Kickstarter project, which mananged to reach its primary goal of $150,000 in only 5 hours and by the time the project ended a month after, it had raised over $600,000 overall, four times its original goal.