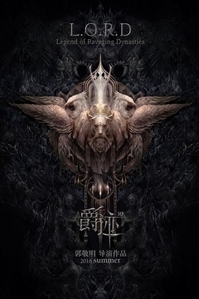 L.O.R.D.: Legend of Ravaging Dynasties is a 2016 computer-animated Chinese film. Featuring an All-Star Cast, the film is China's first feature-length motion capture film. It is an adaptation of director Guo Jingming's fantasy series of the same name, and spans the first two volumes.

The story follows Chiling, a small-town boy who's suddenly thrust into the world of soul powers when a giant, winged lion attacks him. He awakens to find that the beast has sealed itself inside of him, and he has thus become the Disciple of the Seventh Lord Yin Chen. The two then embark on a journey to Glaunort, the imperial capital, but are sucked into the manhunt for the Fifth Duke and his Disciple.

Tropes present in L.O.R.D include