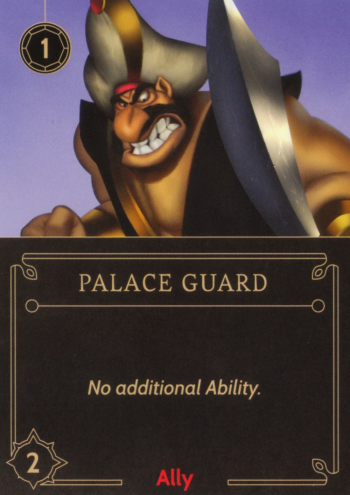 A playable unit with no special abilities. In Collectible Card Games, they can be recognized by their lack of rules text. In Role-Playing Games, they can be gear that does nothing but offer a flat stat boost. They can also be something that does nothing but directly help you reach the game's goal. For instance, in a game about Scoring Points, an item that only gives you a flat sum of points is a Vanilla Unit.
Advertisement:

Vanilla units may seem boring, and they indeed tend to be Boring, but Practical if they're playable at all, but there are still plenty of reasons to include them in a game. They're useful for keeping the level of complexity manageable, especially if a lot of units will appear in a match.note In particular, abilities that can churn out a lot of units will usually generate vanillas, both for balance and complexity reasons. Sometimes they're intended as easy-to-use units for beginners, and progression in the game involves replacing them with better ones. Sometimes they're there to serve as a useful basis for comparisons, or to challenge players to decide when the vanilla unit is better than a unit with worse stats and an ability. Vanillas are also a simple way to show you what to expect of a game's factions: the offence-oriented faction gets Glass Cannon vanilla monsters, the defence-oriented faction gets Stone Wall vanilla monsters, the most monster-friendly faction gets the strongest vanilla monsters, and so on. Also, the lack of rules text means a lot of room for Flavour Text.

In games where you can theoretically use nothing but vanilla units, doing so is usually mediocre at best. After all, it's not a recipe for fun gameplay if the optimal strategy is to spam vanillas instead of trying to take advantage of cool powers or synergies.note Note that a vanilla unit can still benefit from other abilities that synergize with the vanilla unit's type. This is another reason vanillas exist: they can give these strategies a push. Additionally, vanilla units are vulnerable to Power Creep, leaving them as Low Tier Letdowns outclassed by more complex units. There is an exception for the vanilla playable character, however: sometimes these are the hardest to use because they have no special abilities to rely on, while still being good in the hands of an experienced player thanks to their good stats.

Many games, such as Collectible Card Games, also feature some of these variations on vanilla creatures:

These are also suitable for keeping the complexity manageable, while being more exciting and interesting to players. French vanillas are also helpful for showing off common abilities in a simple way.

Sister Tropes for non-playable characters include The Goomba (often a pitiful enemy with no special moves), Mooks (which tend to be rather basic enemies) and Smash Mook (who are powerful, but use very simple strategies/attacks). Vanilla units commonly form the basis for a Zerg Rush and/or a Redshirt Army.

See also Unskilled, but Strong, Boring, but Practical and Simple, yet Awesome. Compare Awesome, but Impractical, Jack of All Stats and Master of None. Compare Power Nullifier, which can sometimes turn other units into vanillas. Not to be confused with Vanilla Protagonist, which focuses on the narrative. See also Muggles for a narrative parallel to this trope.