Your Magic's No Good Here 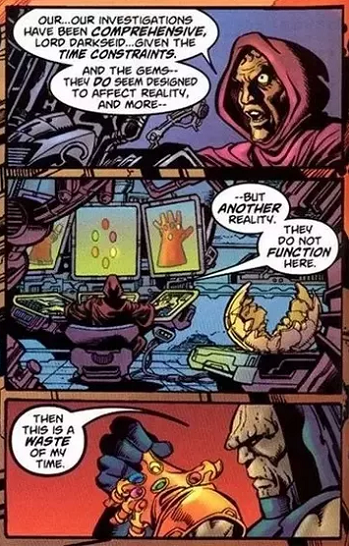 Superweapon in one universe, nothing but tacky handwear in another.
"Your visa doesn't permit the use of your magical powers overseas. It's quite the violation actually."
— Princess Almond to Cream Tea, Apricot Cookie(s)!
Advertisement:

Magic A Is Magic A... but not in Dimension B.

Characters in a fantasy or superhero setting travel to a place (often a different reality or alternate world) where their magic or super powers don't function, or work very differently. They may have a period of How Do I Shot Web? while they learn the new rules, or be forced to Fight Like A Normal if they are locked out of their abilities.

When the foreign magic does work but someone feels it shouldn't, contrast Wrong Context Magic and New Life in Another World Bonus.

Compare The Worf Barrage, i.e. "Your Magic's No Good On Me".

Alternative Title(s): Your Magic Is No Good Here