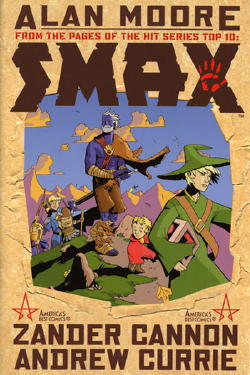 A Spin-Off of Top 10 by Alan Moore. The series focuses on the titular character and takes place right after the events of the series it was spun off from. Like Top 10 it pays homage to genre comics, but instead of superheros and police procedurals, Smax focuses on classical fantasy settings, with the titular hero coming from that sort of world.

Jeff Smax receives news from his homeworld that his adoptive uncle has died, and prepares to go back for the funeral. He also invites his partner, Robyn Slinger (AKA "Toybox"), to go with him. When they reach Smax's former home, Robyn learns that Smax is embarrassed of his homeworld, that with the exception of his twin sister, Smax's family are all dwarves, that his "real" name is 'Jaafs Macksun', and that he brought her with him for more than just company, something she only finds out when he introduces her to his family.

After his uncle's funeral, circumstances manifest that remind Jeff of why he left in the first place, and that when he did leave, he left unfinished business behind. Because of this unfinished business, Jeff is eventually pushed into going off on a quest to slay a dragon named Morningbright. A dragon that he has had prior dealings with, and which is responsible for the presence of the hand-shaped mark on his chest...