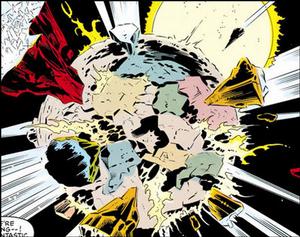 The Beyonder puts the battleworld together like it was a LEGO toy.
Advertisement:

A Patchwork World is a setting that is a composite of several different worlds, from cities to whole lands, usually brought together by some incredible power, like a Physical God or Sufficiently Advanced Aliens. May feature a Patchwork Map if the "sections" are placed together haphazardly. If some of the segments are inhabited, this usually leads to chaotic situations, especially if the cultures in the pieces are very different. Can be played for comedy or straight.

Compare World of Weirdness, which could also be the justification for such a setting. May also justify the Fantasy Kitchen Sink, Anachronism Stew and so on.

Not to be confused with Patchwork Map, although such a map is a likely outcome of a Patchwork World. It also doesn't necessarily involve actual patchwork. See Time Crash for when places from different eras are merged together.