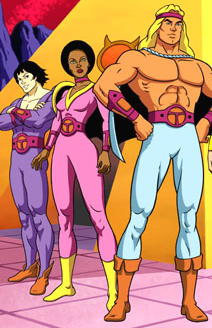 Left to right - Mercury, Astrea and Hercules
"Many centuries ago, three carefully-selected young Earthlings were transported from their native lands to my faraway world. Here they were granted astounding powers, and eternal youth, then returned to Earth, their mission to watch over the human race, helping the good in it to survive and flourish."
—Opening narration

Space Sentinels (originally named The Young Sentinels until it was renamed partway through the season) is a 1970s cartoon series made by Filmation for NBC.

The story tells the tale of three heroes — Hercules, Mercury and Astrea — who were taken out of their timestreams to a faraway world, given superpowers and sent back to Earth to protect mankind. Hercules and Mercury were based on the figures from Greek & Roman mythology but Astrea was created for the series. (In-universe, however, the mythical Hercules and Mercury are explicitly based on them)

The series was well known for being ahead of its time due to the inclusion of two Token Minority characters, forming its own Token Trio.