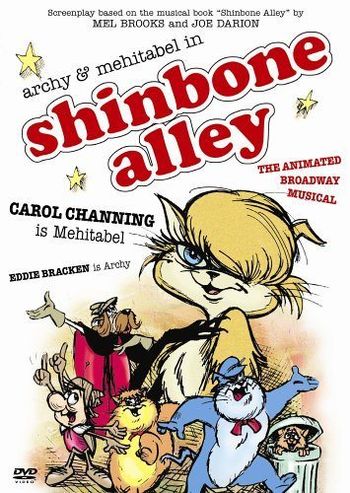 Shinbone Alley is an obscure 1971 animated film based on the Joe Darion, Mel Brooks and George Kleinsinger musical of the same name as well as the archy and mehitabel stories by Don Marquis.

The film tells the story of Archy and Mehitabel after the former, a New York City poet, commits suicide only to come back as a cockroach.

As he learns how to write poetry by hopping on typewriter keys, he grows used to his new life and becomes infatuated with Mehitabel, a singing alley cat. Mehitabel, however, isn't interested in Archy that way and instead prefers to chase and be chased by thuggish tomcat Big Bill. But Archy won't give up and makes it his mission to redeem Mehitabel of her wild ways and maybe win her love in the process...

The movie was made by Fine Arts Films and did poorly at the box office, with critical reception also being mixed. These days it's barely remembered, though did manage to get a DVD release.