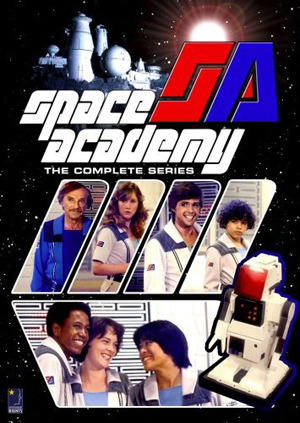 "Welcome to Man's most magnificent achievement in the conquest of Space: the man-made planetoid Space Academy, founded in the star year 3732!"
—Commander Gampu's Opening Narration

Space Academy was a television series produced in 1977 by Filmation, as part of their block of Saturday Morning live-action children's programs on CBS. Exactly What It Says on the Tin, the show follows the adventures of a Five-Man Band of students at a quasi-military/space-science academy as they encounter Negative Space Wedgies, enemies-cum-friends, and other such Star Trek stuff. Ran a single season, but was given a rebirth of sorts in Jason of Star Command, in 1979. It's also notable for starring the late Jonathan "Lost in Space" Harris as the Academy's commander, Isaac Gampu. (Harris had earlier appeared in episodes of Filmation's Ark II.)

Welcome to Mankind's most magnificent achievement in the conquest of Tropes: