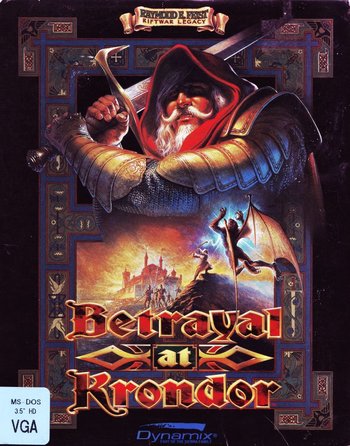 Betrayal at Krondor is a computer Western RPG created in 1993 by Dynamix and published by Sierra. It takes place in Midkemia, Raymond E. Feist's Riftwar world. note However, despite the misconception, Feist did not write any of the plot or the in-game text (having been busy with one of his books at the time), and the story and original characters are entirely the brainchildren of Neal Hallford, lead writer and developer.
Advertisement:

While coming home from his cousin's wedding, a young magician named Owyn runs into an injured Seigneur Locklear, a squire of the Prince's court, and his strange moredhel companion named Gorath. After an assassination attempt by another moredhel, which is foiled by Gorath, Locklear forces Owyn to join them in a journey toward Krondor, capital of the Western Realm. It seems that Delekhan, the leader of the moredhel in the Northlands, is gathering troops for war, and Gorath must get this message to Prince Arutha to mount a counter-offensive, but there is more going on than it seems. . .

The game takes place over nine chapters. Due to the graphical limitations of the time, a lot of the game's plot is presented in text form, in a prosaic format that reads like one of Feist's novels. The game itself utilizes a first-person perspective as the party traverses a (primitive) 3D landscape representing the world of Midkemia and various cities therein, switching to a third-person view whenever the player enters combat.

Betrayal at Krondor was a unique CRPG. Instead of levels and XP, characters gain percentage points in over a dozen skills, but only if they practice that particular skill. For example, a character can only improve his crossbow accuracy skill if he uses a crossbow during combat. Mages do not have any MP; instead, any spells cast use an amount of their health/stamina points. In addition, the game utilizes some unorthodox RPG elements, such as riddle-based puzzle lockchests.

Sierra published a Spiritual Successor Betrayal in Antara as well as a more direct sequel Return to Krondor, although neither were as well-received as the original game. In 1998 Feist novelized the game, and Krondor: The Betrayal became officially a part of the Riftwar canon.

Betrayal at Krondor provides examples of: