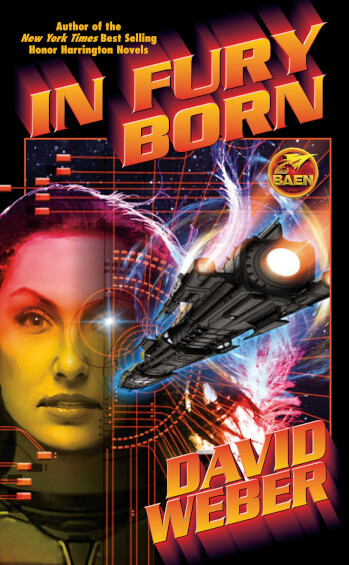 A novel by David Weber. It's an expanded version of Path of the Fury, which centers on elite drop commando Alicia DeVries' Roaring Rampage of Revenge across the galaxy as she hunts down the pirates who slaughtered her family. She has two key allies, though: a sentient starship named Megaira and an honest-to-gods Greek Fury named Tisiphone, who lives in her head. In Fury Born fleshes out Alicia's past: specifically, her military career from the academy to her induction into the Marine Corps to her getting recruited into the ranks of the Imperial Cadre: the most elite military branch humanity has to offer.
Advertisement:

Greek gods notwithstanding, this is a fairly hard military science fiction novel, and it incorporates ideas found in Weber's other stories, such as a strong female hero, imperial naval-style combat and vessels similar to his Honor Harrington series, and bioimplants similar to his Heirs of the Empire series.

In 2021, Weber started a prequel series about Terrence Murphy and the founding of the Empire during the League and Human/Rish Wars; the first book is titled Governor.

Alternative Title(s): Path Of The Fury