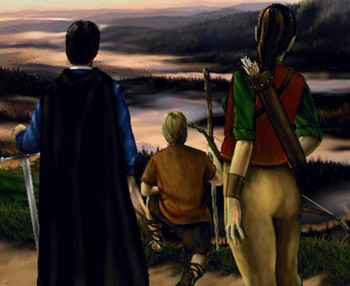 From left: William, Aren, and Kaelyn
Betrayal in Antara is a computer Western RPG developed and published by Sierra in 1997. It is a Spiritual Successor to Betrayal at Krondor. It is based on the same game engine, but Sierra had lost the rights to use Raymond E. Feist's Riftwar world, so Antara takes place in a new world.
Advertisement:

Outside of a small village, Aren Cordelaine, the son of an innkeeper, fishes, dreaming of far-away lands and adventures. Suddenly, he hears a strange noise, and rushes down to the beach to investigate, where he sees a noble trying to fight off a griffon while another man lies on the sand. Trying to help out, he ends up accidentally blasting the monster to ash. The dying man presses a strange medallion into the hand of the noble, and says his last word, "Consort." The noble introduces himself as William Escobar, youngest son of Lord Escobar. He offers to take Aren to his hometown so that he can apprentice under the family mage and learn how to control his newly-discovered magic. Aren agrees. Soon after, they help Kaelyn Usher fight off bandits in the woods, and she joins the other two to settle her debt with them as they try find a teacher for Aren and discover what has put the Imperial Consort in danger.

Like Krondor, Antara takes place over nine chapters. The game has a first-person perspective while exploring the 3D world, and a third-person perspective during battles. Combat is turn-based and takes place on a hexagonal grid. At the beginning and end of each chapter, there is a voiced cutscene which is told through text and pictures in a book.

As it is based on Krondor's engine, Antara keeps many of the gameplay mechanics. There are no experience points or levels; instead, characters gain points in a skill by using it. For example, a character improve the melee skill by using melee weapons. Spells do not use MP; instead, any spells cast use their caster's health/stamina points, although unlike Krondor, spells are studied over time instead of being learned through scrolls. In addition, the game utilizes some unorthodox RPG elements, such as day/night cycles, including simulation of light levels, puzzle-lock chests, and even a food system.

Betrayal in Antara provides examples of: