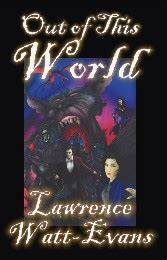 The reissued first book
Worlds of Shadow is a trilogy by Lawrence Watt-Evans. It's the tale of an Unlucky Everydude and his friends and family as they find themselves caught up in a battle against an Evil Overlord who's taken over a fantasy universe and is attacking a sci-fi one. According to the author, "That would imply that the series is science-fantasy, blending two genres — but actually, it's more like horror, because in none of the three worlds do the good guys always win."
Advertisement:

They are as follows: