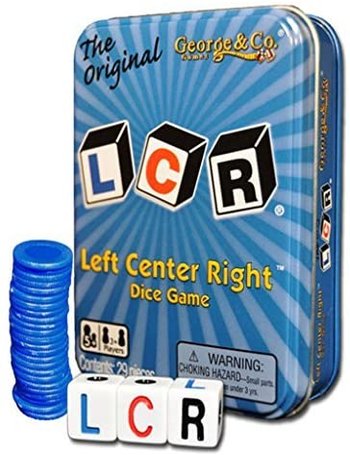 Left Center Right (or LCR) is a Dice Game released in 1992 by George & Company. It's a re-release of the 1959 game Never Say Die by Peter Pan Playthings. The game is played by three or more players and contains three, identical, six-sided dice and an assortment of chips.

To play LCR, each person is given three chips. The player then throws the three dice and does the actions for each die rolled.

The number of dice rolled is dependent on the number of chips a player is holding. So a player holding one or two chips only rolls one or two dice, respectively. A player without chips is not eliminated, as a chip can be passed back to them, but their turn is skipped. The game ends once there's one player left with chips.

A new variant called LCR Wild was released in 2013 and replaces one of the dots with a "Wild" symbol. Rolling a Wild lets the player take chips from other players; rolling three Wilds takes the center pot.

LCR was released in multiple formats such as plastic tubes, a card game, an electronic game, and by other companies. LCR and LCR Wild can also be played using three basic dice and designating what number does what.