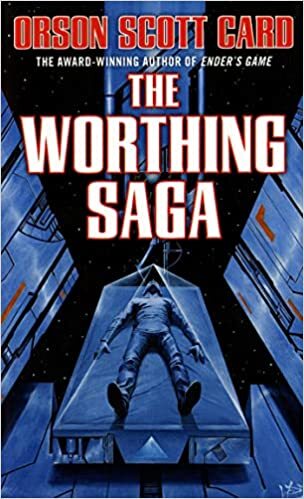 Current canonical version.
The Worthing Saga is a work of science fiction by Orson Scott Card. The book of that title, first published in 1990, collects a novel and nine related short stories.
Advertisement:

It tells an intergalactic story on a similar scale to the Dune universe. The main plot centers around Jason Worthing, The Empire's most famous space pilot — and its most dangerous one, primarily because he has "the Swipe". His Trickster Mentor, Abner Doon, sends him out to found a new colony while he quietly causes The Empire (and thus the known universe) to collapse back into the Dark Ages. Worthing's colony eventually develops into a telepathic powerhouse who consider themselves guardian angels of the human race, removing memories of suffering and pain with their out-of-control powers. Jason makes them cut it out, which is where the events of the novel start.

A significant feature of the setting is the drug somec, which allows a form of suspended animation. A side-effect of the process is that the subject's memory is wiped, but the setting also has a technology that allows a person's memory to be recorded before they go under and downloaded back into their head when they awake — if nothing happens to the recording in the intervening period. The technology is used for practical purposes, such as long-distance space travel, but it has also become fashionable for the rich and powerful to seek a form of immortality by spending long periods in suspension.

The saga has a complicated publication history. Originally it consisted of two books: Capitol, a collection of eleven short stories, and Hot Sleep, a novel about Jason Worthing. Later, Card rewrote the novel and published the new version as The Worthing Chronicle. The 1990 volume The Worthing Saga contains the current official version: the novel The Worthing Chronicle, six stories from Capitol (with the remainder subjected to Canon Discontinuity), and three new stories set on Worthing's colony world.

The Worthing Saga contains examples of: