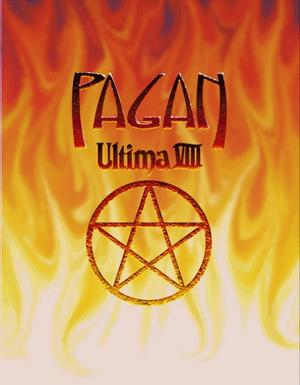 Lovely.
"You have been a thorn in my side for far too long, Avatar. Your two worlds will be crushed. Britannia first, then Earth. I shall parade you before their conquered peoples as the fallen idol of a pathetic ideal. I banish you to the world of Pagan. No one here knows of the Avatar!"
-The Guardian
Advertisement:

Ultima VIII: Pagan (1994) is the eighth official installment in the classic Ultima series of Role-Playing Games by Origin Systems. After The Guardian captures the Avatar, he banishes him to Pagan, a world of eternal twilight very different from the usual series setting of Britannia. Here, the Avatar is forced to find his bearings and learn in a strange new environment. The Virtues of the previous games are gone, and despite being a messianic paragon in Britannia, no one knows of him here. None of his old companions appear in the game, nor does Lord British. Instead, most of the story deals with the Avatar's interactions with the four Titans, powerful demi-gods whose worshippers are capable of different forms of magic. The Avatar travels this world learning the different forms of Elemental Powers, before ultimately facing off the Titans themselves. After this, he hopes to return to Britannia to deal with the Guardian.

Pagan occupies an interesting place in the Ultima series. Executive Meddling meant its production ended up being quite rushed, and many of the original planned elements were left out. The removal of party-based gameplay and the addition of various platform game features also got a mixed reception among fans of the previous games. Combined with the change in setting and lack of relation to the series' story arc, the gameplay changes left it with little in common with the other Ultima games. It is still, however, much more fondly remembered than the Obvious Beta that was Ultima IX, and is quite fun when judged in its own right rather than in comparison with the rest of the series.

An expansion pack called The Lost Vale was announced and apparently completed, but the release was cancelled when Pagan didn't sell as well as was hoped. A full version is confirmed to have existed, but it was not archived and the game is thus lost for good. The only information we have on it are a bunch of screenshots and whatever can be reconstructed from previews and statements by the developers. A single, completed box for The Lost Vale (without the actual game) surfaced in 2005, and was sold on eBay for $1,923.