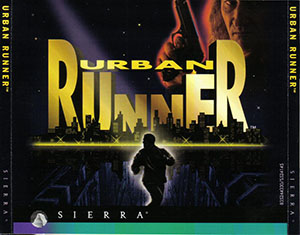 Urban Runner: Lost in Town is a French computer game developed by Coktel Vision and produced by Sierra in 1996. The game is a movie adventure spanning four CD-ROMs controlled by a mouse, divided into Clue and Actions turns. The player character is Max Gardener (voiced by Brandon Massey), an American journalist in Paris, covering a story about a drug dealer shielded by an influential politician. To get the drug lord talking, the player offers him photographs, but when the player arrives, he is dead, and the player is framed for the murder.

Urban Runner was not too popular at the time due to high graphics and monitor resolution requirements - 640x480 resolution, 256 colors at minimum and 32-bit colors recommended; there are very few reviews that have been released about the game.

Despite the serious premise, the game invokes a deliberate B-movie feel, and the story gradually becomes sillier as it goes on.