"Yummm, i wanna go back to my castle and munch sweet tacos!" 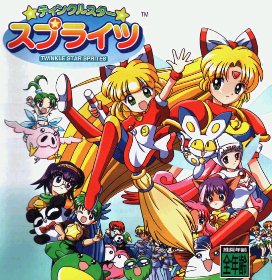 Twinkle Star Sprites is a Cute 'em Up created by ADK in 1996. It was initially released as an arcade game for the Neo Geo platform and is available for the Sega Saturn, Sega Dreamcast, and as well as Windows, Macintosh, Linux.
Advertisement:

In Story mode, you play as Load Ran with her faithful Rabbicat as they try to find the Magical Twinkle Star and save their world from the evil Mevious and his henchmen. Along the way, she encounters friend and foe alike after the Twinkle Star themselves or are trying to stop Ran from doing so. Free Character mode lets you play as one of the other characters and lets you see what would happen if they got the Twinkle Star.

This is where it gets interesting. Unlike most Shoot 'em Ups where players play cooperatively, Twinkle Star Sprites is a competitive shooter where one player is pitted against another or the computer across the screen, where each player has their own half of the field. The game itself is rather short, so its main attraction is in Versus Mode, where players can choose one of nine characters (thirteen, if you count the four secret characters). Players attack each other by destroying enemies and their explosions can be chained together to wipe out more enemies. When the chain ends, fireballs (how many depend on how long the chain is) are volleyed over in varying trajectories across the screen to the other player's side. These fireballs can be shot back by destroying them or if they get caught in another chained explosion. If these flashing fireballs are destroyed again individually, you will perform a character-specific extra attack, but if destroyed in a group of 3 or more indirectly (as in, by the explosions of enemies around it), you will perform a boss attack, which summons a mini-boss to the opponent's field to really mess up their game. The gameplay can quickly get even more hectic with the appearance of a Fever orb (activated only by a bomb or an enemy explosion), which doubles the speed and rate at which fireballs are shot.

Sound complicated? While it's difficult to explain, in play it's actually incredibly simple and incredibly addictive, while still providing a fairly in-depth metagame. Matches on average last anywhere from 30 seconds to three minutes; any longer and you've got two really skilled players. If you're curious, gameplay videos can be found here.

There is a sequel on the Playstation 2 called Twinkle Star Sprites: La Petite Princesse, released in 2005, though it was not released stateside. It introduced a new cast of characters (mostly clones of the original cast), as well as having a few returning characters (namely, Load Ran, Dark Ran, Really Till, Yan Yan-Yung, Memory, and technically Kim) for a total of fifteen characters (Load Ran, Really Till, and the final boss Mikoto are unlockables). The rest of the cast usually shows up in the story mode at some point as a cameo, but were ultimately not playable (Arthur, Mevious, and even the titular character Sprites herself is this).

In celebration of the Neo Geo's 25th anniversary, an port of the arcade version was released on Windows, Macintosh, and Linux through Humble Bundle in late 2015. For those that missed the Humble Neo Geo 25th Anniversary Bundle, the game became available through the Humble Store a mouth later either individually or through bundles of other Neo Geo titles. Another port of the arcade version was released through Steam on May 2016 and GOG.com a year later with online multiplayer and Achievements.