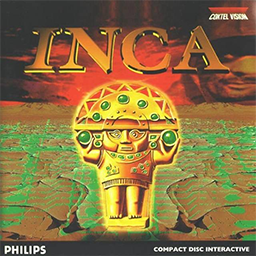 Inca is a 1992 computer game developed by Coktel Vision and published by Sierra On-Line.
Advertisement:

Inca has been famous for combining many different genres including space simulator and adventure game to form a certain storyline. Although mostly a fighting space simulator, some levels were purely shooting, had maze exploration, and some included riddles that could be solved by combining inventory items.

The setting is an achronic war between Incas and Spaniards that takes place in space. Levels vary in gameplay, forming a variable and rich gameplay, however the surreal nature of the game (common in Coktel Vision adventures) gives no comprehensive storyline or solution to riddles, which are solved simply by trying random item combinations. Huayna Capac, last grand Inca, after 500 years of his death, prepares a warrior called El Dorado to fight Aguirre, the Spanish leader. El Dorado will find himself in space flying a Tumi-shaped spaceship and dogfight with Spanish spaceships. El Dorado will find himself fighting his way through mazes, or on board the Spanish mothership (actually a Galleon flying in space) trying to escape, he will meet the Aclla and uncover three magical gems that will help him vanquish the Conquistadors.

Its sequel was released in the same year, under the name Inca II: Wiracocha, in which you play Eldorado and Aclla's son, Atahualpa.