Video Game / Imp of the Sun 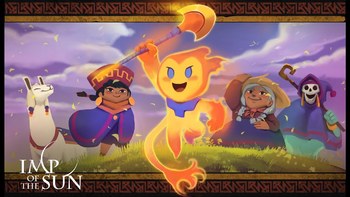 The Sun itself has created the fiery Imp with its dying energy and has sent it to reclaim its fallen kingdoms, now ruled by those that have betrayed the Sun. As the Imp, use your flames, wits, and reflexes to navigate dungeons filled with unrelenting enemies, each ruled over by the Sun’s former, traitorous guardians known as the Keepers who are gods unto themselves, to return light and life to the land and its people!
Imp of the Sun is a 2D open world Metroidvania-style action-platformer developed by Peruvian independent video game studio Sunwolf Entertainment that's set in a world inspired by Peruvian/Inca culture and mythology. In the game, you player takes the role of the titular Imp who can draw its power from fire and must rescue the deity Sun from eternal eclipse by defeating the evil, power-hungry Keepers who are scattered and found in four areas which can be done in any order of choosing, each with their own complex mechanics and backstory. The gameplay is streamlined made for fluid movement and combat. It is scheduled to be released in Q1 2021.