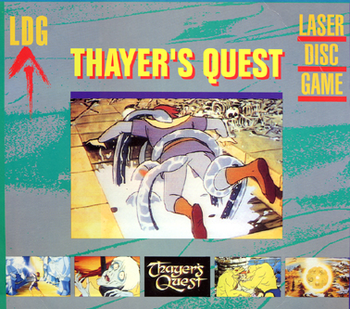 The fantasy is yours.

Thayer's Quest is a 1984 fully-animated laserdisc game in the style of Dragon's Lair or Space Ace, but with somewhat more interactivity.

The player controls Thayer Alcanred, an apprentice magician and last of a magically-blessed bloodline. His mentor tasks him with finding the pieces of the almighty Hand of Quoid before the evil wizard Sorsabal. The game's main goal, however, is to deal with Sorsabal's pawn, Torlock, who killed the rightful king and queen and now sits on their throne. Under his despotic reign the land has become a place of chaos where where evil lurks around every corner.

A sequel incorporating the second half of Thayer's quest was planned, but the developers went bankrupt before it could be completed (probably owing to the system it was created for going for something in the ballpark of $2500). When CD-based consoles and computers made the format more accessible in the 1990s, Thayer's Quest was given a facelift (creator Rick Dyer thought the original game was "too 70's") and rereleased as Kingdom: The Far Reaches. The second game completing the story, Kingdom: Shadoan, was also finally completed and released not long after.

Unlike games such as Dragon's Lair and Space Ace, which only required the player to tell their character where to move or when to attack in accordance with the animation, Thayer's Quest was a full-on Adventure Game. The player had complete control over Thayer's movement from area to area, accumulating items to let him defeat enemies and escape traps.