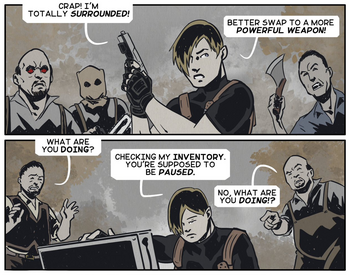 Sure, they won't attack you. But they'll chatter about your stuff inside the luggage... Source Art

In virtually every video game with a pause feature, time stands still, enemies and environments freeze in their tracks, etc., and while at first this, being the very definition of a pause, might not seem unusual, when Fridge Logic sets in you can't help thinking about the fact that in many cases the pause screen is the same as the inventory screen, allowing a character to rummage in his Bag of Holding or Hammerspace and use items, equip different weapons, chug potions, stuff a whole barrel of raw potatoes down their throat and even completely change his wardrobe essentially instantaneously. Especially prominent in Role Playing Games, in which the player often spends a great deal of time in menus handling equipment or abilities.

Menus are the most common place for this to occur, but it often happens with certain other types of interactions. For instance, lock picking frequently gets done as a Hacking Minigame. In these cases, you may also be able to get this trope if you are able to play this to your advantage. You also very often get something similar with dialogue, but the player is normally locked into the dialogue and unable to do anything, See Talking Is a Free Action for details. Compare Real-Time Weapon Change for a similar effect outside special screens.

All this comes under Gameplay and Story Segregation, except in some cases of Pausable Realtime.* Life doesn't grind to a halt when you change your clothes, but your body isn't helplessly paralyzed for a few seconds every time you perform a task that's not one of your top several most commonly done either. This can also be a form of Acceptable Breaks from Reality; because it is very annoying form of game-over to be shot while you're trying to do something in the menu. For obvious technical reasons, this trope doesn't apply to multiplayer games save for counted exceptions, and most games that apply this in single player mode drop it in multiplayer mode.