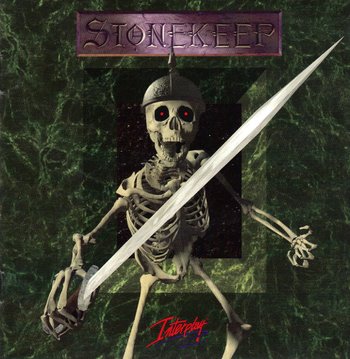 "I am Thera, Goddess of Earth. Prepare yourself, your journey awaits. You must descend to the lost city of Stonekeep and retrieve the nine receptacles. To protect you from the magic of the darker realm, I must free your spirit from the confines of your body. Achieve your goal, and Stonekeep and I will be set free. Fail, and you will be entombed by the forces of darkness...forever."
—Thera, final narration at the end of the intro movie.
Advertisement:

Stonekeep is a 1995 first-person Action RPG for MS-DOS by Interplay Entertainment.

The story is about a boy named Drake, an inhabitant of the human stronghold Stonekeep, who was saved from the destruction of the earth's surface by a mysterious figure. After wandering the destroyed earth for years, he returns to his old home to be greeted by the goddess Thera, who has momentarily escaped the grasp of her brother, the dark god Khull-Khuum, the one responsible for the end of the world. She explains to Drake that although the other gods are powerless and sealed away in orbs by Khull-Khuum, she has managed to wrest the orbs from his control and they are now scattered throughout the ruins of Stonekeep and the tunnels below. Before getting resealed by Khull-Khuum, she manages to send Drake's spirit on his way to collect all the orbs, defeat Khull-Khuum and restore her temple.

On his journey through the ruins of Stonekeep and the mines below, Drake ends up smashing a lot of enemies, including the goblin like Shargas, the Khull-Khuum worshipping Throgs and Khull-Khuum's own nightmarish legions. On the way he also meets new friends, including a bunch of dwarves, the rebel Sharga Skuz, the last remaining Elf Enigma and the insidious self-proclaimed "King of all fairies and goblins" Wahooka.

The game's claim to fame would have been the detailed full-screen 3D environments (which are seamlessly built up from pre-rendered graphics) and the almost completely in-universe interface (only the settings and save/load screens take you away from the 3D view). Sadly, the game spent 5 years in Development Hell and when the game finally hit the stores, the troubled development has left some marks and caused the game to get mixed reviews. Released along with the game is a surprisingly readable short novel, Thera Awakening, which introduces the game world's races and pantheon as well as Drake's parents. The opening FMV is also suprisingly good for the time, this being only a few years after FMV's introduction on home computers.

A sequel titled Stonekeep II: Godmaker was in production for five years until it was cancelled in 2001. In early 2010, a new Stonekeep game for the Wii was announced with a Q3 release schedule. Stonekeep: Bones of the Ancestors was finally released on 2013 to good sales yet negative reviews.