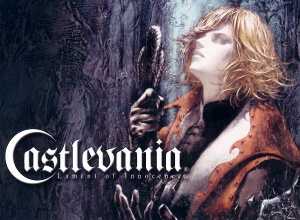 Walter: That power is quite something... but I am beloved by the Night! You will taste my powers!
Leon: I'll kill you AND THE NIGHT!!
Advertisement:

Castlevania: Lament of Innocence is a 3D Action RPG game released for the PlayStation 2 in 2003, which serves as a prequel to the rest of the Castlevania series.

In the late 11th century, during the Crusades, Baron Leon Belmont's fiancée is kidnapped by a vampire named Walter Bernhard. Under the urgings of his bedridden friend Mathias Cronqvist, Leon renounces his title and leaves behind his sword to rescue his love. Luckily, in the vicinity of Walter's home, he comes across the alchemist Rinaldo Gandolfi, who gives Leon the Whip of Alchemy. Thus begins a journey that in one way or another codifies and justifies the many elements of the Castlevania storyline.

Released shortly after Castlevania: Aria of Sorrow, this game would be followed up by that game's sequel as well as another 3D entry in the series, Castlevania: Curse of Darkness.

It is notable for being the first Castlevania game to feature the franchise's modern logo, as well as the first to receive an M rating from the ESRB. It was re-released via PlayStation Network on June 18, 2013 as a PS2 Classic for PS3.

Lament of Innocence provides examples of: