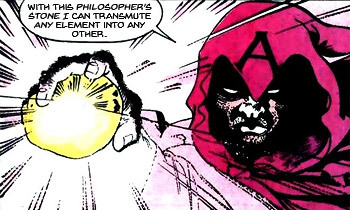 According to legend, the Philosopher's Stone is a mysterious MacGuffin, almost always a red rock in reference to the alchemy term "rubedo", created by either magic or alchemy, which allows you to do any number of things, including transmuting any metal into gold, allowing you to live forever through an elixir of life, or ascendance into Godhood. (Note that these uses are connected: gold can not rust, thus it is a substance that makes things immortal.) Other possible attributes include:

And in settings where Alchemy Is Magic, it usually turns Alchemy Up to Eleven, giving the person using it almost god-like powers. Unfortunately, like most MacGuffins it comes with some sort of catch, either involving Human Sacrifice, being Powered by a Forsaken Child, or something equally repugnant.

Note that this cost is largely only in fiction: In most alchemical modes of thought, the Philosopher's Stone was a metaphor for the result of achieving a sort of Gnostic enlightenment, where your knowledge and self-control reach the height of or go beyond human potential, and you transcend the worries of the mortal world to join with God. The reason the Stone isn't common is because most people simply don't have the capacity or experience to reach this state, and those who do likely wouldn't have the desire to use the thing anyway, what with being what essentially amounts to a mental Physical God and all. An often overlooked fact is that in order to get it, you must not want to use its power. More specifically, in order to attain it, you must have reached a degree of spiritual enlightenment that renders you content with your lot in life and, as such, do not feel any need to make use of the Stone's more profane (i.e. non-spiritual, like the turning lead into gold bit) properties.

It's less that you are unwilling to use it, and more that you don't feel the need to use it. It should also be noted that some sources claim that the immortality was a result of the process required to forge the stone, rather than being a property of the stone itself — by the time you're able to make the Philosopher's Stone, you no longer need it.

Examples of the Philosopher's Stone in media: