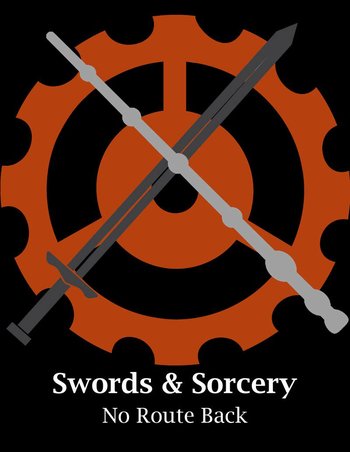 . While not quite a Fusion Fic, it manages to near-seamlessly include aspects of the Fate/Stay Night universe into the mythos of Harry Potter, while creating clear distinctions between the two styles of magic.

When an accident leaves him flung from his home dimension and into an unfamiliar London, Shirou finds himself de-aged back to an eleven year-old and enrolled as a student of Hogwarts. If that wasn't enough, he somehow gets himself entangled with the Girl-Who-Lived, Iris Potter, and cannot help but try to save her. Hilarity and hi-jinks ensue. With the occasional sword or arrow.

It is rather slow-paced, but a wide fan base, and Apocrypha added on a semi-regular basis, it is very much alive.

The fic can be currently found at Spacebattles

Swords and Sorcery contains examples of the following tropes: