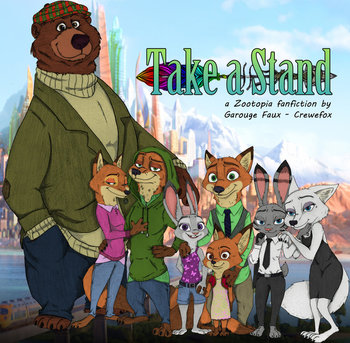 Take a Stand is a Zootopia fanfic by CreweFox. It can be read both at Tumblr

, now Archive of Our Own

Zootopia is gripped with civil strife whilst a political storm is brewing. Judy and Nick must be honest with each other, as must Clawhauser and Bogo but events unfold around them that will test their love and their ideals. Meanwhile, a heist gang are stealing millions from the corrupt and giving it to the poor. It's time for Judy and Nick to stand for what they believe in.

The story is also a Massive Multiplayer Crossover that plants characters from almost every other Disney franchise with animals into Zootopia.

The first "book" was finished April 2017, forms a trilogy with Star of Ceartais

There is a currently ongoing Spin-Off, titled Dimensions and Time

There`s a large character page that needs a LOT of editing.

open/close all folders
Take a Stand
Star of Ceartais 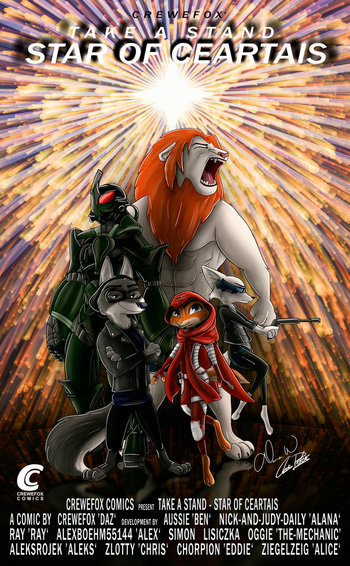 Spoilers for Take a Stand!

15 years after Take a Stand, Zootopia is at relative peace. Judy is chief of police and has a teenage daughter with Nick, Robyn Wilde (named after her grandfather), who has a crush on her classmate Hannah Savage, daughter of Jack and Skye. Unfortunately, one night disaster strikes, an earthquake followed by a tsunami devastates the city, leaving destruction and crime in its wake. Changed by the disaster, in more than one sense, Robyn and Hannah with their friends Kodi and Kion and with assistance from Luna and Olivia decide to take things into their own hands.

. Spoilers for The Broken Mirror.

1 month after The Broken Mirror, the team is still on less-than-good terms, when Robyn looks at a mirror and sees a living Alternate Self of Ronan — her stillborn littermate — in a dire situation and gets him out by bringing him to her own dimension; before he, half the team, and a couple others are sucked into a portal (formed on the mirror) that leads them to Ronan's dimension, where he takes the Undying Scarlet's place in his Team Ceartais.