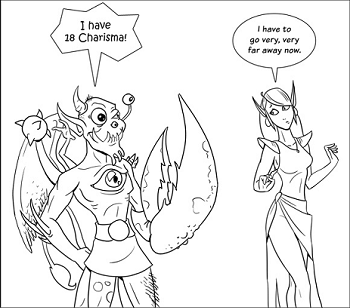 This has its drawbacks.
"For years, we've been trying to combine the bloodlines [vampire and werewolf]. And for years, we've failed. It was useless. Even at the cellular level, our species seemed destined to destroy each other."
— Singe, Underworld (2003)
Advertisement:

Some people like a Ninja Pirate Zombie Robot, which is why making a Hybrid Monster that combines two fantastic creatures into one, like a cyborg-centaur or a demon-elf, is popular in fiction. However, like most good things, it can be a bit overdone.

This is especially true when an author wants to conserve as much Willing Suspension of Disbelief as possible; believe it or not, readers might have trouble swallowing a half sunlight elemental / half vampire.

In a superhero setting, the trope expands to include 'super-origins' as well. A character's powers, however diverse, need a single unifying theme. Logically, if aliens and Functional Magic are real, there must be alien magicians somewhere, but they won't appear as main characters. Undead who are bitten by radioactive hamsters don't manifest additional hamster-related powers: they just eat the hamster.

In a game setting, this trope is used to avoid the presence of Ninja Zombie Pirate Robot throwing Competitive Balance right out the window when you can, within the rules, get any power listed on any species' charts with limited or no Necessary Drawbacks. It's essentially a way for the designers or Game masters to avoid someone making an overpowered Red Mage. Smart game designers (or ones that have had experience like White Wolf, makers of The World of Darkness) have gone the extra mile to explain why such hybrids can't exist.

Inside the story, this is usually justified (or at least given a decent Hand Wave) by having one supernatural/technological/biological "monster" or race be naturally immune (or violently allergic) to being hybridized with another. For example, a character who's been changed into a werewolf can't be mutated with The Virus since their Healing Factor protects them from further mutation. Robots won't become ghosts because, y'know, no Soul.note Virtual Ghosts are doable, though. For whatever reason, in some settings characters can only change into one kind of supernatural critter, or only be one "at a time".

Sometimes, the "immunity" is due to the idea that the character can't be changed from one type of their common category to another, such as zombies and vampires, which are different types of their common category of undead.note In fact, the two were once synonymous, with the only significant difference being that the former were from African folklore and the latter from European folklore. Sometimes the offspring only inherits one of their parent's types, or a few, but not all, of either's traits. Subverting this trope is usually a very big deal, it marks the birth of a powerful and Unique creature that can upset the Status Quo thanks to One Hero, Hold the Weaksauce.

See also Hybrids Are a Crapshoot, where this trope is averted with detrimental results.

The only reason that there are still humans in Xanth at all is that successive waves of immigrants from the mundane world keep coming into Xanth and replenishing the gene pool before it disintegrates.