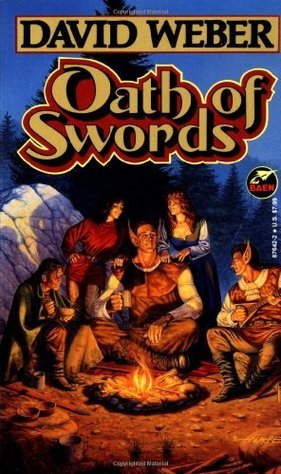 The War God Series by David Weber, aka the Bahzell series or Orfressa Cycle. Heroic Fantasy focusing on Bahzell, son of the Prince of Hurgrum, member of the Horse Stealer hradani.

Set in a world some 1,200 years after the fall of the Empire of Ottovar, the largest empire ever known by the Races of Man. The Empire fell due to a conspiracy of dark wizards who allied themselves with cults of dark gods and caused a multi-generational war that ended in a stalemate. All but one of the white wizards died or went insane by casting the Strafing across the former empire in order to give a chance for refugee fleets to get more people out of the few ports they still controlled. Now the refugees who escaped to Norfressa have rebuilt and expanded across much of the continent.

The dark wizards used many tools, but their shock troops were mind-controlled hradani. The other Races of Man never forgot it, even if it wasn't the fault of the hradani. Some hradani escaped as well to form their scattered clans, but the hradani did not forgive the other races for how they were left hanging out to dry, and especially how their pleas to the gods were ignored. A thousand years after the fall, the Gods have come back to the hradani, but many hradani—especially Bahzell, the chosen of Tomanak, the God of War and Justice—don't want anything to do with them. Too bad the dark gods don't care what they think...

Currently at five books and a novella in the overall cycle, with the Bazhell novels standing at four books and a novella. David Weber has confirmed a seven book series is forthcoming which he considers to be his Magnum Opus, which involves a Time Skip to a new generation, with the first book The Sword of the South already released. A fifth book and novella for the current generation will eventually come out.

The Bazhell series consists of:

The seven-book series begins with:

The Mission of Honor library CD

contains the first three books and the "Sword Brother" novella. Per Baen's library CD terms of use, the contents of this disc may be freely shared without restriction.