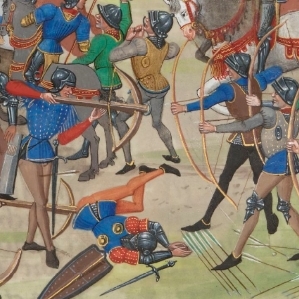 Despite being very different weapons, each built with a different purpose in mind, in many Fantasy settings, standard bows and crossbows seem to be at odds with each other. For instance, Mooks are more likely to have crossbows, while heroes get regular bows. Less graceful, more 'brutish' or 'brute force' characters get crossbows while the graceful characters get arrows.

Bows also carry an air of elitism about them, in a manner of speaking. While almost anyone could be taught to use a crossbow in relatively short time, and as such large masses of people with less training were equipped with them, a bow requires many years of practice to be truly good at. Thus anyone using a bow in a fight is likely to have many more years of training, and potentially be more of a career fighter. Going along with that, a truly great archer with a bow generally can be more lethal than a great archer with a crossbow, due to how much faster their shooting rate could be.

Bows are usually treated as much less powerful than crossbows and thus are more likely to get the Annoying Arrows treatment. In contrast, crossbow bolts tend to be shown as having proper stopping power when they hit and are generally shown being more lethal. One reason for this disparity likely has to do with movie props. Prop crossbows can be made with high draw weights closer to historical crossbows, as their spanning devices allow virtually anyone to draw them. Prop bows, on the other hand, tend to be of low draw weight like most beginner and target shooting bows, as they have to be usable by actors who lack the specific muscle development and training in form to draw heavy bows. As such, bows seen in movies tend to be a lot less powerful than most historical hunting and war bows were. Also keep in mind that medieval European crossbows were less mechanically efficient than longbows of the time because of factors such as their short powerstroke (~6 in. compared to ~24 in. for a longbow) and the energy wasted moving their heavy limbs and strings instead of just the bolt; in particular, crossbow prods made out of steel made manufacturing of heavy crossbows easier compared to those using a horn and sinew composite, but the high density of steel caused loss of efficiency, and steel prods couldn’t flex as far as wood or composite without risk of breakage. Thus, in order to achieve as much projectile energy as a longbow of a given draw weight, a crossbow needed to have a draw weight many times greater.note These energy comparisons don't necessarily apply to all non-European crossbows. For instance, Chinese crossbows were more similar to a normal bow mounted to a frame and had a long powerstroke. Modern crossbows are much more efficient than their medieval ancestors thanks to improved materials and design,note such as a long powerstroke, compound or reverse draw mechanisms, and lightweight bolts, strings, and limbs so they achieve higher projectile energy than crossbows of old despite having lower draw weights.

Based on the fact that men are stronger than women on average, fictional stories sometimes portray men using crossbows and women using bows, the notion being that crossbows are utilitarian and brutal while bows are elegant and rely on finesse rather than brute strength. In reality, if you were going to train men and women to use different weapons it should be the other way around: crossbows with spanning devices would allow women to repeatedly shoot powerful bolts without tiring even if they have less raw upper body strength, while a man (or indeed any person) with greater strength could handle a bow with a heavy enough draw to yield respectable range and penetrating power, and use it to shoot more rapidly than with a crossbow.

One other aspect often seen in fiction treats crossbows as being "sneaky" weapons because they're marginally more concealable than bows, and because of lingering cultural ideas that the possibility of large numbers of serfs armed with crossbows being able to perforate aristocratic, land-owning knights is somehow unfair and against the natural order of things. Miniature, concealable versions may appear as assassin's weapons and be shot with one hand like a pistol, though in real life these weren't popular or effective as weapons. note miniature crossbows have a very short powerstroke and the projectile is small, so that even with a relatively high draw weight, the number of joules that can be imparted to the projectile will be relatively underwhelming. Despite sometimes being misleadingly described as "assassin's crossbows", ballestrinos from the Renaissance are suspected to have been treated more like expensive toys than practical weapons. While they are dangerous enough that you could seriously hurt someone with a bolt at close range, and might even be able to reliably kill them if the bolt was poisoned, we lack any historical records indicating the ballestrino was used this way; it would have made more sense to use a dagger or a pistol.

In Real Life, the main advantages of a drawn bow were rate of fire and mechanical efficiency: a decent archer could loose arrows much faster than a crossbowman could shoot bolts, and the large draw length spreads out the power required to pull back the string so that a strong and skilled archer can draw a heavy bow without a time-consuming spanning device. This disparity was somewhat mitigated by the fact that an archer would try not to use up his limited supply of arrows too quickly, while a crossbowman could speed up his rate if he had spare crossbows and assistants to span them for him while he was shooting. The ability to shoot rapidly was most important in horseback archery—a hit-and-run art in which the rider has a short window of opportunity to shoot as many arrows as possible before retreating out of range—and least important in sieges, during which the archer or crossbowman could take his time reloading behind cover without having to worry about his position being charged.

Meanwhile, crossbows had advantages in that with spanning devices they require less upper body strength to use compared to a longbow with similar projectile energy, they are easier to use in a confined space or from a hiding position, they can be held ready at full draw without exhausting the archer, and on a Game-Breaker level, training a crossbowman to shoot accurately and use a weapon of useful military draw weight only took a few weeks, whereas it took years to for an archer to develop instinctive aiming and build up his body to draw bows of military power.

Crossbows were the first of the two to disappear from European warfare, since by the 16th century the arquebus had stolen its niche as the mass point-and-shoot weapon of the battlefield; crossbows continued to stick around around as recreational and hunting weapons. For another century or more the English tried to supplement arquebus armies with units of longbowmen because they could still beat the arquebus in shooting speed. However, the ease of equipping and training soldiers with guns and the dwindling numbers of skilled warbow archers eventually retired the bow from warfare as well. Western Europe was actually a bit of an outlier in terms of how early they gave up military archery, since warriors in many other parts of Eurasia liked to arm themselves with both musket and bow for different applications well into the 19th century.

Related to Fantasy Gun Control, in which crossbows tend to stand in for absent guns. See also Kinetic Weapons Are Just Better.