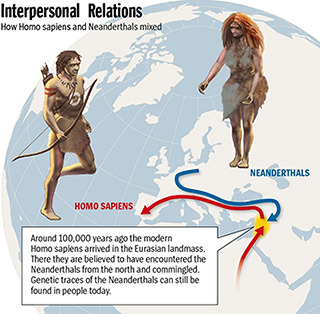 As the trope Human Aliens describes humans that are literally Aliens, Human Subspecies are genetically "alien" but related to humanity to some degree. Quite simply, they are biological variants of regular humans. They are typically a result of evolution or other scientific developments, causing a derivative of Homo sapiens to form, or a completely new species of the genus Homo — or even a new genus altogether! Unlike Human Aliens, Human Subspecies do not have to look like humans, and may not even be recognized as human at first.

There are generally three types of Subspecies:

Those who are offshoots of today's humans are often termed Homo superior note note the lower case of the species name, as is done with binomial nomenclature if they are supposed to be a significant improvement (or they perceive themselves as such, if they're the ones calling themselves that). However, this is not necessary — writers could use other Latin or Greek words for use in their work. If the derivative humans are a literal subspecies, then the scientific name would come after "Homo sapiens". For example, regular humans are H. sapiens sapiens, a hypothetical subspecies of human could be named H. sapiens hupothesis.

This should not be confused with "regular" biologically augmented humans, or Transhuman Aliens. To be considered a subspecies, they need to have some biological difference from baseline humanity.