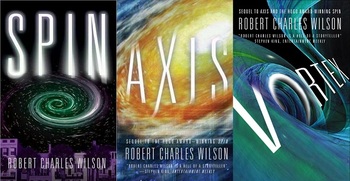 The first book in the series, Spin, follows narrator Tylor Dupree and his childhood friends, twins Jason and Diane Lawton. As children they witness the strange phenomenon that alters the course of human history: the night the stars disappeared from the night sky. As they grow up, the world slowly discovers the truth: the Earth has been covered by a membrane (dubbed "the Spin") that slows down the flow of time on our planet. A lot.

So much so that after about fifty years on Earth, over four billion years will pass outside. By that time the sun will expand into a red giant and destroy the planet.

Trying to find out where the Spin came from, and looking for ways to survive the destruction of Earth, forms the plot of Spin.