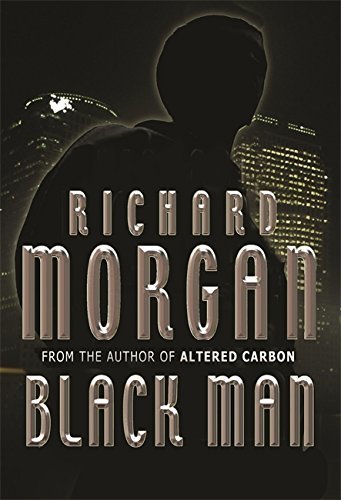 Black Man (U.S. title Thirteen) is a 2008 sci-fi mystery novel from Richard K. Morgan that feels like a Stealth Prequel to the Takeshi Kovacs series.

In the future, humans toyed with a wide array of genetic experimentation to create Human Subspecies, to be used for specific forms of labour - servants, soldiers, number crunchers. Each of them tapped into specific human traits, amplifying them at the expense of the others. The most problematic of the bunch? "Variant thirteen", a hypermasculine male variant, a genetic throwback to the eponymous hunters of the hunter-gatherer era, bred out through lack of necessity. Useful in times of war, in peacetime (or during colder wars) thirteens are dangerous, unstable and for that, socially ostracized. These days, they're mostly used as workforce in the terraforming of Mars...

But when a ship headed from Mars to a nanorack on the Pacific Rim instead splashes down in the ocean, the crew apparently eaten by a stowaway, the ugly truth rears its head: nobody catches renegade thirteens better than other thirteens. And Carl Marsalis makes his living exactly doing that...

Aside from minor dating inconsistencies, the book feels very much like the Takeshi Kovacs setting before the discovery of Martians (or, if you will, as an alternate universe where they just weren't there to be found) and so has crude prototypes or precursors of much the same technologies - experia, virtual realities, rampant nanotech use, designer-virus-loaded bullets, etc, etc.