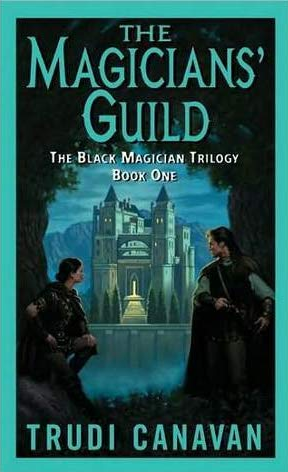 The Black Magician Trilogy is the debut series of Trudi Canavan, and is centred around the country Kyralia where only the rich and powerful are allowed to learn and use magic, and the poor are more or less ignored unless they're being trodden underfoot. This age-old system has something of a spanner jammed in its works when Sonea, a girl born and raised in the slums of the capital city Imardin, discovers that she has natural magical abilities. Since she learns this by throwing a stone through a magical barrier and knocking out a magician, it doesn't exactly stay a secret for long.

The original trilogy follows Sonea as she evades and then is recruited by the Magician's Guild, learns to control her powers, tries to avoid being bullied, gets caught up in a power struggle, falls in love, goes on an epic journey and saves her country from destruction. It was followed by a prequel, The Magician's Apprentice, and the sequel trilogy, Traitor Spy, was finished in 2012.

Spoiler Warning: Nothing Is the Same Anymore after the end of the original trilogy. Entries regarding the Traitor Spy trilogy may have unmarked spoilers.

Tropes that show up in this series: