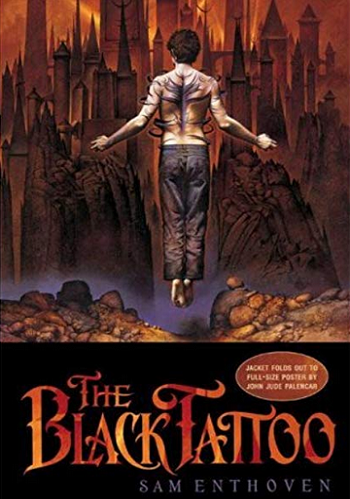 The Black Tattoo is a Young Adult science fiction novel by Sam Enthoven about a guy who gets possessed by a demon inside a tattoo, while his best friend has to fight for his life in an arena made by the Devil himself. It is also incredibly epic.
Advertisement:

The story begins with Charlie, whose parents are recently divorced, meeting his father in a restaurant with his best friend Jack Farrell. They leave the restaurant, however, after Charlie snaps at his father. Soon afterward, Charlie is unknowingly possessed by a demon known as the Scourge. He also joins the society known as The Brotherhood Of Sleep, who imprisoned the Scourge in the roots of a tree until one of their own released him.

With Charlie's help, the Scourge manages to first kill all the members of the Brotherhood, save for their youngest member, a girl named Esme, who has trained all her life to kill the demon. Soon after the death of their members, a possessed Charlie gets into a gateway to Hell, which is essentially a Roman Empire of sorts composed of demonesque species and even gladiator pits. Soon after Charlie reaches Hell, The Scourge's true goal is revealed: He wishes to awaken "the dragon" who created the universe, and upon awakening he will destroy it again. Suddenly, it is up to Jack, Esme and a team of soldiers to stop Charlie and the Scourge from destroying the universe.

Tropes associated with this book include: